South Korea's Constitutional Court overturned a ban on doctors telling parents the gender of unborn babies, saying Thursday the country has grown out of a preference for sons and that the restriction violates parents' right to know. 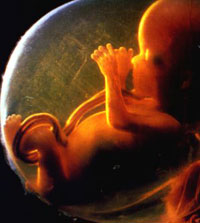 South Korea introduced the ban in 1987 to try to prevent abortions of female fetuses in a country that had traditionally favored sons in the widespread Confucian belief that males carry on family lines. Abortion has also been illegal but practiced widely.

On Thursday, the Constitutional Court said it was too restrictive to ban doctors from telling parents the gender of the unborn for the entire pregnancy because there was little chance of aborting fetuses older than six months due to risks for mothers.

"The legislation's purpose is recognized in that it helps resolve the sex-ratio imbalance and protects the fetuses' right to life," the court said in the ruling. "But it overly limits the basic rights of parents and physicians by placing a blanket ban through the latter half of pregnancy."

It also said the preference for sons has lessened to a point where the ratio of newly born boys and girls in the country has almost reached the natural level of 100 girls to 106 boys.

"Considering this, we cannot but question whether the sex-ratio imbalance is a serious social problem and whether the fetus gender notification is serving as a cause for abortion," it said.

The court ordered the law be revised to reflect the ruling by the end of next year, and said the current ban will stand until the revision. Rulings by the Constitutional Court cannot be appealed.

Judge Kim Bok-ki, who serves as the court's spokesman, said the ruling means the law should allow doctors to let parents know their babies' gender in the latter half of pregnancies.

"It is natural for doctors to give patients information collected during diagnosis," the association said in a statement.

The court case began in late 2004 when a lawyer filed a petition after doctors refused to tell him the gender of his unborn baby. The following year, a doctor filed a similar suit after he was suspended for half a year for violating the ban.

A violation of the current ban is punishable by up to three years in prison and a fine of 10 million won (US$9,830).

The ban has been enforced relatively strictly at large hospitals, but not at neighborhood clinics that offered gender information in various ways, including telling parents whether the baby is "cute" or "energetic" - allusions to girls or boys.