A small but enthusiastic Singapore crowd got its first taste of professional eating as the sport's two titans - Takeru Kobayashi and Joey 'Jaws' Chestnut - made their debut in the city-state. 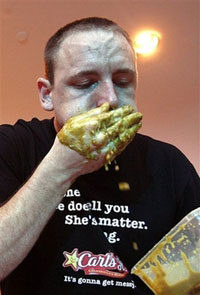 "I've followed Kobayashi's career on YouTube, so it's really exciting to see him in person," said Ricky Chen, a 31-year-old graphic designer.

The professional eating circuit, known as Major League Eating, was organizing its first contest in Asia, one of about 80 competitions a year in which "gurgatators" wolf down foods such as grits, sticks of butter, oysters, jalapenos and cow brains, all the while hoping to avoid the dreaded "reversal."

At 5 feet 9 inches tall (173 centimeters tall) and 160 pounds (73 kilograms), Kobayashi is something of a legend in the competitive eating world, winning the Nathan's hot-dog eating contest in New York for 6 years running until Chestnut beat him last year and again July 4.

"During a contest, I get in a zone where it's just me and the food," Kobayashi said after the match, with pea-green chicken sauce splattered all over his black T-shirt. "Sometimes, it's like I'm in a trance."

The blue-haired, boyish-looking 30-year-old, who took home about US$200,000 in prize money and appearance fees last year, laughed and blushed when asked about his sex symbol status among legions of female fans in his homeland.

"It's very embarrassing. I don't think I'm a sex symbol," Kobayashi said. "But sometimes women send me their clothing."

Chestnut, 24, said he could have performed better.

"The sauce was sweeter than I expected, and that slowed me," said Chestnut, who once ate 66 hot dogs and buns in 12 minutes. "I couldn't find my rhythm. And Kobayashi is a machine."

The two eaters, who did not compete for any prize money at the Singapore contest, signed autographs and took pictures before and after the event.

Chestnut, an engineering student at San Jose State, said he made about US$100,000 last year competing in about 20 contests.

"I'm just a regular guy. I don't have any groupies yet," said Chestnut, who is 6 feet 2 inches tall (188 centimeters tall) and 215 pounds (98 kilograms). "Usually I get guys in their 40s trying to challenge me to eat something. Of course, I always crush them."

Chestnut brushed off critics who say the competitions are grotesque spectacles and in poor taste with so much hunger in the world.

"There are always critics," said Chestnut. "Not everyone likes football either."

Nerz insisted competitive eating is a legitimate sport, and Kobayashi and Chestnut are world-class athletes.

Yet during the contest, he acknowledged the competition's circus-like appeal.

"I'm astonished, I'm appalled, I'm shocked," Nerz bellowed into a microphone as Kobayashi and Chestnut shoveled food into their mouths.

The competition forms part of Singapore's bid to fashion the city-state as a more hip and attractive place to live. The event was part of the Singapore Food Festival, which sought to present "unique dining experiences with a host of interactive events," the Singapore Tourist Board said in a statement.

"Singapore rarely gets events like this so I think it's good," said Rachel Tan, a 21-year-old student. "It's entertaining, but I also feel a little sick after watching that."

At least one Singaporean was left ecstatic by the event.

Rosalind Sim, 52, won the amateur undercard by scarfing down 2 Carl's Jr. double cheeseburgers in 12 minutes. The advertising salesperson was awarded a gift certificate for 500 Singapore dollars (US$368) at Swensen's ice cream restaurant.