The European Union, in a protest against Canada's seal hunt, has proposed a total import ban on products derived from seals that are inhumanely killed. 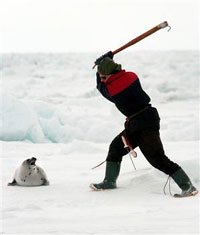 EU Environment Commissioner Stavros Dimas says seal products coming from countries that "practice cruel hunting methods" cannot be allowed into the 27-nation bloc. The proposal was announced by the European Commission on Wednesday.

The EU has been under increased pressure from animal rights groups and lawmakers at the European Parliament to take action over the seal hunt, which they claim is cruel and should be stopped.

Seal hunting, or sealing, is the personal or commercial hunting of seals for their pelts, blubber, and meat; as well as to ensure the population does not reach levels that would threaten other species. The hunt is practiced in five countries: Canada, where most of the world's seal hunting takes place, as well as Greenland, Namibia, Norway, and Russia. Seal hunting is an important source of income and food in small coastal communities where other opportunities are limited.

Seal populations were severely depleted when commercial sealing became a major industry, with the world harp seal population declining to 1.5 million. As a result of population concerns hunting is now controlled by quotas based on recommendations from the International Council for the Exploration of the Sea (ICES), and in 2007, the Canadian Department of Fisheries and Oceans (DFO) set the "total allowable catch" (TAC) of harp seals at 270,000 per year. This number is, by comparison, smaller than the average number of animals killed for pelts on European fur farms every week. Harp seals have never been considered endangered and the Marine Animal Response Society, per March 2007, estimates the harp seal population in the world at 9.5 million.