A court charged a man Tuesday with the murder of a woman and her young daughter whose strangled bodies were discovered in their home in southeast Australia 24 years ago, police said. 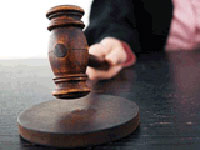 Russell Gesah, 43, appeared at Sale Magistrates Court in Victoria state where he was charged with the 1984 murder of 35-year-old Margaret Tapp and her 9-year-old daughter Seana, police spokeswoman Vicki Vass said. Each charge carries a potential life sentence.

The child had also been sexually assaulted. Vass had no details on whether Gesah was to be charged with sexual assault.

Gesah was linked to the crimes after new technology allowed DNA found on the child's clothes to be compared with tens of thousands of genetic profiles held in a national DNA database, Detective Senior Sgt. Jeff Maher said in a statement. Gesah's DNA came up as a match, Maher said.

Detective Senior Sgt. Jeff Maher alleged in a statement that Gesah had made a random attack on the Tapps, whom he did not know.

"We had already eliminated all the known suspects in the case through a DNA sample, but because this man was never a suspect, he was never tested," Maher said.

Vass said Gesah did not enter a plea to the charges and will remain in custody. He is scheduled to appear Monday at the Melbourne Magistrates Court.