US Airways to remove movie systems from plane for domestic flights

Better bring a book on flights. 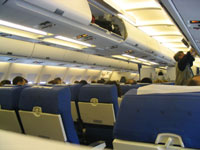 US Airways to remove movie systems from plane for domestic flights

US Airways says it will start removing in-flight entertainment systems on domestic flights in November to save about $10 million annually in fuel and other costs.

Spokesman Phil Gee says the movie systems weigh about 500 pounds (227 kilograms) each, forcing planes to use more fuel to get around the country.

Jet fuel costs have skyrocketed in recent years, slashing profits and leading to thousands of layoffs and flight cuts throughout the industry.

Gee says US Airways will cut the movie systems from about 200 aircraft. But it will keep movies in its widebody aircraft for international flights and trips to Hawaii.

US Airways says it will test a lighter, seat-back TV system later this year. However, Gee says a new entertainment system is a long way off.