Queen Elizabeth II is set to launch the summer season Tuesday afternoon with the first of several elaborate garden parties on the grounds of Buckingham Palace. 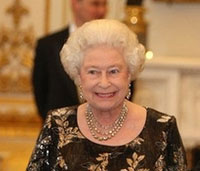 Some 8,000 people were invited to have tea, sandwiches and cake with the queen and her husband, Prince Philip. They were expected to be joined by other senior members of the royal family.

The queen's summer garden parties are a long-standing institution dating back to the 1860s, when they were instituted during the reign of Queen Victoria.

The guest list is far too long to allow everyone in attendance to meet the queen, so she usually is introduced to a number of guests as she walks from the palace to the royal tea tent.

No one can ask to be invited. Coveted invitations are issued by the Lord Chamberlain after guests are nominated by military officials, diplomats, charitable organizations, civil servants and others.

The gates of the palace are usually opened early so that guests have a rare chance to walk through the impressive 42 acres (17 hectares) of gardens and ponds on the rear grounds of the imposing, 775-room palace.

The dress code is formal, with many of the men choosing to wear tails and top hats and the women opting for floral dresses and elaborate hats.

In the past, the queen has held themed garden parties to mark special events. On the year of her 50th wedding anniversary, she invited guests who were also marking their golden anniversary.

The queen serves simple food at the parties, but a tremendous amount of preparation is required. Typically, 27,000 cups of tea are served, along with 20,000 sandwiches and 20,000 slices of cake.