Russian actress Nonna Mordyukova, whose roles earned her the status of the quintessential Soviet woman, has died, Russia's Union of Cinematographers said Monday. She was 82. 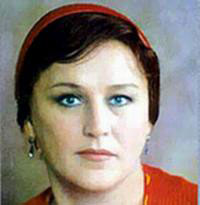 The cause of her death Sunday was not reported. Russian news agencies said she had suffered from diabetes and dementia.

"She truly was a people's actress," President Dmitry Medvedev said in a statement posted on the Kremlin's Web site. "Her films are close and dear to generations of Russians."

Throughout a career that spanned half a century, Mordyukova appeared in dozens of films, including some textbook examples of Soviet propaganda. Her characters often faced a tough choice between devotion to Communist dogma and the quiet happiness of family life.

Mordyukova first found fame at age 23 in "Young Guards," a 1948 epic about a group of young Communists that fought against Nazi Germans during World War II. She continued with versatile and critically acclaimed performances in adaptations of Russian classics, comedies and family dramas.

Since the 1990s, Mordyukova had lived a reclusive life in a Moscow apartment that was given to her by the government after she complained about her dire financial situation. Her marriage to popular actor Vyacheslav Tikhonov ended in a divorce in 1963, and her only son, Vladimir, died of drug abuse.

Mordyukova is to buried Wednesday at the Kuntsev cemetery in Moscow, the Union of Cinematographers said.