Portuguese police are dropping their investigation into the disappearance of toddler Madeleine McCann due to a lack of evidence, media reported Tuesday. 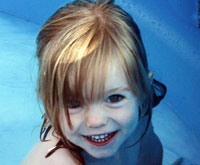 Three Portuguese newspapers said the Public Prosecutor's office would call off its search for the British girl before Aug. 15, when the customary official secrecy period covering the investigation ends.

Closing the case would mean that official suspects, including Madeleine's parents, would no longer be under formal investigation.

Police could reopen the case if new evidence were to emerge, the newspapers said.

The police media office in Lisbon said there was no official comment on the reports.

Madeleine McCann went missing in Portugal's southern Algarve region during a family vacation in May 2007, a few days before her fourth birthday. Detectives named her parents, Kate and Gerry, and local man Robert Murat as formal suspects in the case. All denied involvement in Madeleine's disappearance.

The Portuguese lawyers for the suspects could not immediately be reached by telephone.

The McCanns, who have waged an international campaign to find their daughter, returned home to central England with Madeleine's younger sister and brother last September, a few days after they were named as suspects.

Clarence Mitchell, the parents' spokesman, said they were trying to confirm Tuesday's media reports but said he expected the search for Madeleine to continue.

"The information in their files surely cannot sit on the shelf gathering dust. Kate and Gerry will never give up searching for their daughter," Mitchell said.

He said that if Portuguese police end their inquiry they should hand their files over to the McCanns' private investigators.

"The police themselves must continue looking for Madeleine. We are concerned that if they are to simply shelve the case then what will happen to all of the information in their files? They must be made available to our investigators, who are working extremely hard to find Madeleine," Mitchell said.

The case has drawn global interest. A few weeks after Madeleine vanished, Pope Benedict XVI blessed the McCanns and a photo of their daughter during his weekly general audience at the Vatican. Numerous reported sightings of the blonde-haired girl proved to be false.

British and Portuguese police have cooperated in the investigation. Sophisticated forensic tests on evidence gathered at the resort where the girl disappeared were carried out in Britain.

In April, British police in England, accompanied by Portuguese detectives, re-interviewed the McCanns' friends, who were having dinner with them when Madeleine vanished.