Gay men of young age show a higher percentage of HIV diagnoses in the USA, a new study says. The experts, who conducted the research do not use the word ‘gay’ in their work, but prefer to put it as MSM – ‘men who have sex with men.’ Such a term has been chosen because many of the young men showing a higher percentage of HIV diagnoses are not strictly homosexual or even bisexual. 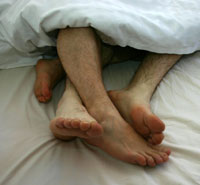 Male sex used to make the largest category of the HIV transmission in the USA from 2001 to 2006. This category was also the largest one associated with the increasing number of HIV diagnoses. The number increased most with men aged 13-24 who have sex with other males, especially with males of ethnic minorities.

Men who have sex with men (MSM) is a classification of men who engage in sex with other men, regardless of whether they identify themselves as homosexual/gay, bisexual, or heterosexual. The term is intended to reference a particular category of people as a risk-group for HIV, and is considered a behavioural category.

As this label can only be reliably applied where the sex of individuals is unambiguous, it is not used for transsexuals, transgendered individuals and intersexuals, except in cases where it is clear that they engage in risk behaviors similar (or equivalent) to the risk behaviors of unambiguous men having sex with unambiguous men. Because risk factors vary between cultures, the category is not used for cases in which this specific risk behavior is no longer a significant category for the contraction of HIV or other STDs.

- Sexually active gay males
- Bisexual males sexually active with other males
- Men on the down-low with other men
- Anonymous (or faceless) sexual encounters between men such as at glory holes
- Male sex workers (commercial or not) with male clients.