China's highest court overturned 15 percent of all death sentences reviewed in the first half of this year, an official newspaper said Friday, although the total number of executions remains a state secret. 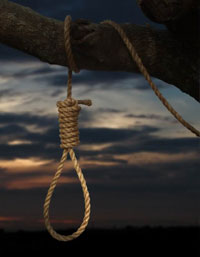 The China Daily touted the rejection rate as a sign of the high degree of scrutiny exercised by the court since it took back the right of final review from lower courts last year.

Most of the sentences were overturned for lack of evidence or because they were "inappropriate," the newspaper quoted Judge Gao Jinghong, of the Supreme People's Court's Third Criminal Law Court, as saying.

China is following international trends in reducing numbers of executions and could eliminate the death penalty altogether "when social conditions demand so," the newspaper said. "But for now it has to stay."

China is believed to execute more people per year than any other country. Human rights group Amnesty International estimates that at least 470 people were put to death last year. That was down from an estimated 1,010 in 2006, the group said, but cautioned that the actual number of executions was undoubtedly higher.

Mark Allison, a Hong Kong-based researcher for Amnesty International, noted the report indicated that 15 percent of judgments in the lower courts were unsound and those people would have been executed under the old system.

He said it was still vital that China say how many executions were carried out to build transparency and trust.

"We can only guess that the authorities are embarrassed by the huge number of people being executed," Allison said in a telephone interview.

He said Amnesty International's smaller estimate of executions last year could reflect an actual decline, or be the result of reduced reporting of executions by the state-controlled media, or delays due to teething problems with the new review process.

Six months or more can pass until cases are heard, allowing for a significant backlog to build up, Allison said.

Many aspects of China's legal system remain opaque, with cases considered to have political aspects tried behind closed doors. Evidence, even in capital cases, is described only vaguely and often goes unchallenged.

The Supreme People's Court relinquished the right of final review to speed up hearings and executions during an anti-crime drive launched in the 1980s.

The court's right was restored on Jan. 1, 2007, following a series of scandals involving miscarriage of justice and false prosecutions that put pressure on the legal system.

The use of the death penalty even for nonviolent crimes such as graft or tax evasion - and the practice of parading condemned criminals before crowds prior to execution - also have lent Chinese justice a reputation for brutality that increasingly sensitive Communist image managers have been eager to alter.