Germany marked the 60th anniversary of the start of the Berlin Airlift on Thursday, celebrating an unprecedented undertaking that likely saved the city from falling to the Soviets and helped mend German-American wounds from World War II. 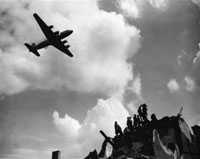 Often called the first battle of the Cold War, the airlift pitted the U.S. and the Soviets against one another for the first time and set the tone for the decades to come.

"I find the courage with which this operation was carried out truly admirable," German Defense Minister Franz Josef Jung said at a ceremony at the U.S. Army Airfield in Wiesbaden, from which many of the flights originated.

The airlift's significance wasn't immediately apparent, however, when it began on June 26, 1948.

The future looked "bleak" to Berliners at the time, said Helmut Trotnow, director of Berlin's Allied Museum. "There was no light at the end of the tunnel, but the airlift brought this light."

"If it hadn't been for the success of the airlift, history would have looked very different," he said. "It really is a turning point."

After the war, zones of western Germany were handed to Britain, France and the U.S. to administer, while the Soviet Union was handed the east. Berlin was inside the Soviet sector, but also divided among the four powers.

In an effort to squeeze the Western powers out of Berlin, Soviet dictator Josef Stalin in June 1948 blockaded all rail, road and ship traffic into the city.

On June 26, the U.S. and Britain launched "Operation Vittles" - an unprecedented airlift that would supply some 2 million West Berliners with food and fuel for 11 months until the Soviets lifted the blockade; and several months after that in case Stalin decided to change his mind.

"It changed my life entirely," retired airlift pilot Gail Halvorsen, who lives in Utah, said at the Wiesbaden event. "We were operating with our former enemies for one common goal: freedom."

Neither side resorted to force - setting the tone for the Cold War - though 39 Britons, 31 Americans and at least five Germans were killed in accidents.

On the ground in Berlin, ex-Luftwaffe mechanics were enlisted to help maintain aircraft, and 19,000 Berliners - almost half women - worked around the clock for three months to build Tegel Airport, providing crucial relief for the British Gatow and American Tempelhof airfields.

American airlift pilot Bill Voigt remembers that seeing the suffering - and determination - of the Berliners quickly erased any resentment lingering from the war.

"Regardless of how you felt about the Germans, you had to pay due homage to them for their determination," Voigt, 87, said on a recent trip to Berlin. "Most of the people in my squadron and the people I knew felt the same way - that they were putting up a gutsy fight to keep out of the hands of the Russians."

On the other side, Germans - especially Berliners - were shown the human face of their former enemies, working with the occupying western forces on a large scale for the first time against the Russians.

In an earlier interview, Halvorsen said it is too often forgotten that the Soviets offered better rations to West Berliners willing to register with communist authorities - an offer that only 20,000 accepted.

Halvorsen, 87, is probably the best known of the airlift pilots - remembered for dropping candy to Berlin children on parachutes made out of handkerchiefs. After he started "Operation Little Vittles" other pilots also joined in.

The operation really took off after a short Aug. 19, 1948 story by The Associated Press ran in newspapers across the U.S. with the headline "Lollipop Bomber Flies Over Berlin" - prompting a wave of candy and handkerchief donations.