A Russian regional court on Monday convicted four teenagers of burning a man to death in the eternal flame of their town's World War II memorial. 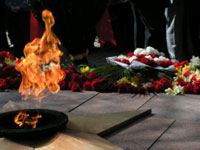 The Vladimir Regional Court gave prison sentences of 16 to 18 years to three 19-year-old defendants, while a 15-year-old defendant was sentenced to a juvenile detention center for nine years, court spokesman Vladimir Ganenko said.

The victim, 25-year-old Alexei Denisov, came upon the teenagers while walking home on the night of Jan. 1 in the industrial town of Kolchugino, about 130 kilometers (80 miles) northeast of Moscow.

He reprimanded the teenagers, who were smoking and drinking around the town's eternal flame, part of a memorial to Soviet soldiers killed in World War II, the magazine Ogonyok wrote. The teenagers beat Denisov unconscious and threw him face-first into the flame, Ganenko said.

They were caught after a guard in the nearby city court called police, who found the defendants dragging Denisov's body toward a dumpster, Ogonyok said.

"This was a brutal, cruel, conscious, group murder, and of course it deserves a severe punishment," Denisov's mother, Olga Denisova, told NTV television. Her son, who worked in the town's metallurgical plant, was her only child.

The teenagers - 19-year-olds Alexander Andreyev, Mikhail Danilov, Nikolai Kuragin and 15-year-old Alexei Goryachev - laughed during the reading of the verdict and taunted Denisov's relatives from the defendants' cage in the courtroom, the Rossiya television station reported.

When the sentences were read, they appeared stunned and one of them was shown with tears in his eyes.

"Of course no one expected this," Andreyev's lawyer, Igor Ivkov, told Rossiya. "We hoped the sentence would be lighter."

The defendants intend to appeal the court's decision, Ganenko said.

The case was given broad coverage on all three national television stations.

Many Russian cities and towns have eternal flames to fallen soldiers and they remain revered sites. Newlyweds lay flowers on the memorials on their wedding day, and official visitors pay their respects by placing wreaths.