Taiwan is considering letting star entertainers from mainland China perform on the island, an official said Tuesday, as ties warm between the rivals after their split during a civil war in 1949. 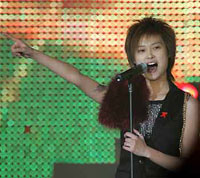 Chen Su-nann, section chief at the Government Information Office's Department of Broadcasting Affairs, said the government may remove current restrictions that limit the exposure of Chinese actors and singers to the island's TV and radio shows. They are not allowed to stage concerts or act in live drama productions.

Taiwanese stars do not face such restrictions in China, Chen said.

"We want to steer cultural exchange toward a situation of equality and mutual benefit," Chen told The Associated Press.

It was not immediately clear when Taiwan might ease the restrictions.

Communist China still claims democratic, self-ruled Taiwan as its territory and has threatened to attack the island if it formalizes its de facto independence.

Ties were strained during the recently ended eight-year term of former President Chen Shui-bian, who favored independence and stressed a separate Taiwanese identity.

Chen's successor, Ma Ying-jeou, wants stronger relations with the mainland. The two sides have already agreed to set up quasi-official representative offices in each other's territories and are expanding transportation links.

Beijing is likely to welcome Taiwan's possible dropping of the ban on shows by performers from the mainland, whose entertainment industry is booming.

China and Taiwan share the Mandarin Chinese language, but Chinese pop culture has long been dominated by Taiwan and former British colony Hong Kong, whose stars carry wide appeal in the mainland and often appear in TV ads there.

Few mainland Chinese stars, however, have achieved the same level of success in Hong Kong or Taiwan.

Chinese stars were banned from such Taiwanese productions until July last year, when the government allowed it - with a quota of two Chinese actors per movie.

The government is open to raising the limit, Chen Chun-jer said.