Medicare health providers owe the government over $2 billion in payroll and other taxes. It was proved that they used the money to purchase luxury cars, expensive homes and other items for their own personal well-being. 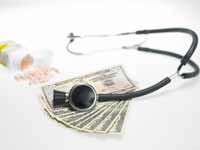 Health care providers withheld $896 million from their employees’ paychecks for Social Security and Medicare programs. Hospital owners wired the money to their personal accounts instead of paying taxes to the government.

Medicare is a social insurance program administered by the United States government, providing health insurance coverage to people who are either age 65 and over, or who meet other special criteria. It was originally signed into law on July 30, 1965, by President Lyndon B. Johnson as amendments to Social Security legislation. At the bill-signing ceremony President Johnson enrolled former President Harry S. Truman as the first Medicare beneficiary and presented him with the first Medicare card.

Part of the cost of Medicare is attributable to fraud, which government auditors estimate costs Medicare billions of dollars a year. The Government Accountability Office lists Medicare as a "high-risk" government program in need of reform, in part because of its vulnerability to fraud and partly because of its long-term financial problems. A Washington Post story from June of 2008 reported that Medicare fraud is a growing problem. Limited resources mean that fewer than 5% of Medicare claims are audited. The annual cost to taxpayers of Medicare fraud is estimated to be over $60 billion.

In 2003 Congress passed the Medicare Prescription Drug, Improvement, and Modernization Act, which President George W. Bush signed into law on December 8, 2003. Part of this legislation included filling gaps in prescription-drug coverage left by the Medicare Secondary Payer Act that was enacted in 1980. The 2003 bill strengthened the Workers' Compensation Medicare Set-Aside Program (WCMSA) that is monitored and administered by CMS.