Japan executed three convicted murderers Tuesday, including a serial killer who mutilated the bodies of young girls in the late 1980s in a case that triggered calls for tighter restrictions on violent pornographic videos. 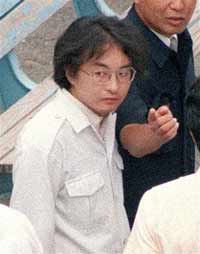 Miyazaki burned the body of one 4-year-old and left her bones on her parents' doorstep. He also wrote letters to the media and victims' families taunting police. Japanese newspaper reports said he ate part of the hand of one of his victims and drank her blood.

The two others executed Tuesday were Shinji Mutsuda, 45, who had been on death row for the murder and robbery of two people, and Yoshio Yamasaki, 73, who was convicted of killing two people for the insurance money, the Justice Ministry said in a statement.

"I ordered their executions because the cases were of indescribable cruelty," Hatoyama said. "We are pursuing executions in order to achieve justice and firmly protect the rule of law."

Japan, one of the few industrialized countries that has capital punishment, has picked up the pace of executions over the past year amid rising concerns about violent crime.

The three executions brought to 13 the number of death-row inmates hanged in the past six months under Hatoyama, an outspoken supporter of the death penalty. Only one inmate was executed in 2005.

The human rights group said the pace of executions was quickening, citing a two-month interval between the two latest executions, calling it "proof that Japan is moving to routinely execute inmates in large numbers." The group also demanded that Japan abolish capital punishment.

Prime Minister Yasuo Fukuda, however, said there was no need for a change.

"There is no other policy than to maintain the current policy," Fukuda said Tuesday. "There are people who want to abolish it, but that is a minority view. The majority want it maintained. I feel there is no need to change it, but we must also keep an eye on world opinion."

Hatoyama, who took office last August, denied his ministry was purposely picking up the pace of hangings. Three men were executed in December, three more in February and another four in April.

In 1997, Tokyo District Court found Miyazaki guilty of killing four girls aged 4 to 7 years old in 1988 and 1989, and sentenced him to death. The Tokyo High Court upheld the sentence in 2001, and the Supreme Court followed suit on Jan. 17 this year, exhausting Miyazaki's appeals.

Miyazaki also was convicted of the abduction and sexual assault of a fifth girl.

The murders and Miyazaki's arrest dominated Japanese headlines, along with the discovery that his home was filled with a collection of thousands of violent pornographic videos, animated films and comic books stacked floor-to-ceiling.

The case triggered concerns that many young people had become desensitized to human suffering through the repeated viewing of graphic images in videos and comics.

The government began to release the names of those executed and their crimes in December, easing its secret policy in an apparent move to gain understanding and support for capital punishment.

Despite international criticism of Japan's death penalty, there is little opposition to the policy domestically.