No more nudity on US most famous nude beach

Campaigners want naked bathers to cover up at one of the most famous nude beaches in the United States. 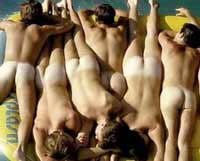 No more nudity on US most famous nude beach

For decades, people have visited the beach at Lake Willoughby's Southwest Cove in Vermont which is listed in nudist guides and on Web sites. All are welcome, naked or not, while cameras without permission and sexual behavior are forbidden.

The beach is on public land that isn't visible from the highway. The state - which has no laws banning public nudity - advises visitors with a sign at a trail head leading to the beach that warns "be advised, you may encounter nude bathers."

But some Westmore residents want to be able to use the beach without having to worry they or their kids will confront a naked person. They're pushing the town to pass an anti-nudity ordinance.

"For me, it's about common public decency - getting families and kids and people and Westmore back down to what they all talk about as being the most beautiful place, and they don't go there any more," said Tony Strange, who lives about a half-mile (kilometer) from Southwest Cove and helped circulate a petition asking for the ordinance.

Regulars say the nude beach is an accepted part of the area that doesn't cause any trouble.

On a recent hot Saturday afternoon, about 15 people were at the beach. Other than the absence of swimsuits, there was nothing to distinguish it from a traditional beach: People brought beach chairs and coolers, some paddled canoes, others just sunbathed.

"We try to make it clean, safe and enjoyable for everyone, that includes families with children, that includes anyone from anywhere, and yet we're being accused of dominating the area," said David Timson, who has been going to Southwest Cove for 20 years and is head of a newly formed organization called Friends of Southwest Cove.

Westmore, about 20 miles (32 kilometers) south of the U.S.-Canada border in northeastern Vermont, has a year-round population of 319, which jumps to about 1,000 in the summer.

Town Clerk Greg Gallagher said the three-member town Select Board has been asked to deal with the issue of nudity before but chose not to. "They didn't see how they could enforce it," he said.

Enforcement remains a question, though the board is due to consider the issue again at its June 23 meeting.

Vermont has long been known for clothing-optional swimming holes, some clandestine, others semipublic. Southwest Cove, which is part of Willoughby State Forest, has had a reputation for being nude friendly for about a quarter-century.

Bob Drew, a summer resident who lives in Knoxville, Tennessee, and is president of the 350-family Westmore Association, said the group's 11-member board was split 6-5 in favor of the nudity ordinance.

"We all have our personal feelings about it. I just don't go down there," said Drew, 75, "Most of them are fat old men like me. Who wants to see them?"

Raymond LaFountaine, 41, of Magog, Quebec, and his wife travel to Westmore several times a summer to camp nearby and relax nude at Southwest Cove.

"I think it's a privilege because it's such a beautiful place, such a peaceful place, we can enjoy that little beach," LaFountaine said.

Strange said he and his family would also like to enjoy the beach.

"All we're looking for, you know, is no nudity on the public beach," he said. "You want to be naked in private, fine. ... I just don't want you to prance around like a puffed up chicken in front of my kids and think it's OK."