Author of best novel about love dies at 79

Kyrgyz author Chingiz Aitmatov, who introduced his mountainous Central Asian nation to the world through novels about ordinary lives under the Soviet regime, died in Germany on Tuesday, relatives, colleagues and Kyrgyz officials said. He was 79. 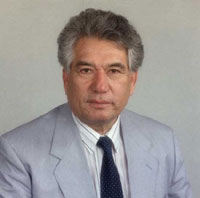 Author of best novel about love dies at 79

Aitmatov died of pneumonia at a clinic in Nuremberg, said Lucien Leitess, the head of Unions-Verlag, his publisher in Germany, where he had been hospitalized after falling ill last month. His family was with him.

Aitmatov first found fame with his 1958 novel "Jamilya." Set during World War II, it tells the story of a young Kyrgyz woman who leaves her husband and runs away with a crippled war veteran. The novel sparked heated discussions in the majority Muslim and male-dominated society about whether a woman could leave her husband for another man.

In other books, Aitmatov described life in the Soviet Union, introducing the term "mankurt" to describe people turned into slaves through torture and memory loss. Kyrgyz nationalists use the term derogatorily to describe ethnic Kyrgyz who have abandoned their ancestors, history and culture for the Russian language and the Western way of life.

Aitmatov was an advocate of preserving the cultures and languages of non-Russians in the Soviet Union. In his novel "The Day Lasts Longer Than A Century," he wrote about a boy who kills his mother because he doesn't remember her.

One of the few Kyrgyz known outside his nation of 5 million people, Aitmatov strongly influenced the country's political life. His backing of Askar Akayev, who was president from 1990-2005, was crucial for Akayev's initial election as the Soviet Union was breaking up.

Chingiz Torekulovich Aitmatov was born Dec. 12, 1928 in the village of Sheker, in northwestern Kyrgyzstan's Talas region, to a family of Communist Party activists. In 1935, Aitmatov's family moved to Moscow.

Three years later his father, Torekul Aitmatov, a Kyrgyz Communist leader, was sent to a camp where he was executed as part of Soviet dictator Josef Stalin's purges. His body was found 60 years later in a mass grave in northern Kyrgyzstan. That personal tragedy was reflected in a number of Aitmatov's works.

His 1986 novel "The Scaffold" was among the most widely read books of the perestroika years. The story of a defrocked priest who meets a violent death after infiltrating gangs of drug traffickers and poachers, it was filled with Biblical references and contemplation of the nature of evil.

Aitmatov "was flooded with awards, medals and state adoration but always remained honest and incorruptible," the RIA-Novosti news agency quoted Russian writer Viktor Yerofeyev as saying. "He was an example for the intelligentsia of the 1970s Brezhnev era, when there was no hope that literature could maintain its innocence."

After the collapse of the Soviet Union in 1991, Aitmatov's novels found a new audience in the West and gained popularity in Germany.

His son Askar Aitmatov was Kyrgyzstan's foreign minister between 2002 and 2005.

Kyrgyz authorities proclaimed 2008 the Year of Aitmatov in honor of his 80th birthday.

"A man who was close to all of us is gone," former Soviet leader Mikhail Gorbachev said, according to Interfax.

Aitmatov is survived by his widow, three sons and a daughter.