Gay weddings to sweep through California from June 17

Barring a stay of a historic California Supreme Court ruling, same-sex couples will be able to wed in the state beginning June 17, according to a state directive. 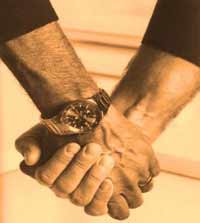 Gay weddings to sweep through California from June 17

And such unions might soon be recognized at the other end of the country in New York, where the governor has directed state agencies to do so.

California said Wednesday it chose June 17 because the state Supreme Court has until the day before to decide whether to grant a stay of its May 15 ruling legalizing gay marriage.

Gay-rights advocates and some clerks initially thought couples would be able to wed as early as Saturday, June 14. The court's decisions typically take effect 30 days after they are made.

The guidelines from Janet McKee, chief of California's office of vital records, to the state's 58 county clerks also contained copies of new marriage forms that include lines for "Party A" and "Party B" instead of bride and groom. The gender-neutral nomenclature was developed in consultation with county clerks, according to the letter.

"Effective June 17, 2008, only the enclosed new forms may be issued for the issuance of marriage licenses in California," the directive reads.

A group opposed to gay marriage has asked the court to stay its decision until after the November election, when voters are likely to face a ballot initiative that would once again define marriage as a union between a man and a woman. Passage of the initiative would overrule the Supreme Court.

Under the Supreme Court's regular rules of procedure, justices have until the end of the day June 16 to rule on the stay request, according to the memo sent by e-mail to county clerks. Lawyers involved in the marriage case have said previously the court could grant itself an extra 60 days to consider the stay.

"To deny this fundamental constitutional right to same-sex couples based on speculation about what might happen in November would not merely be inappropriate, it would be inhumane," Herrera's filing said.

Gay marriage is not legal in that state, and its highest court has said such unions can be legalized only by the Legislature. But a memo based on a state court ruling this year says the state will recognize the marriages of New Yorkers who are legally wed elsewhere, said Erin Duggan, spokeswoman for Gov. David Paterson.

A poll released Wednesday found that for the first time, about half of California voters support same-sex marriage.

"I would say this is a historic turning point or milestone," poll director Mark DiCamillo said. "We have speculated in the past there would be some time in the future when a majority would support same-sex marriage. Well, the lines have crossed."

The survey of 1,052 registered voters was conducted over the phone from May 17 to May 26 and had a sampling error of plus or minus 3.2 percentage points.

Andrew Pugno, legal adviser for the coalition of religious and social conservative groups sponsoring the measure, said the Times poll is more consistent with his group's internal polling.

"We could acknowledge there has been increasing acceptance of the idea of gay relationships over the last 10 or 20 years, but we think when it comes to marriage there is still a solid majority who want to see it reserved for a man and a woman, and that is all this initiative is about," Pugno said.