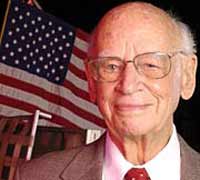 Stuhlinger had been in failing health recently and missed the 50th anniversary of America in space in February. His last public appearance was in December at the "Science Goes to the Moon and Planets" seminar in Huntsville, and he spoke on his 50 years of work in rocket programs, said Ed Buckbee, a former director of the Space and Rocket Center.

Stuhlinger served as chief scientist for Dr. Wernher von Braun and was among the group of German scientists who moved with him to Huntsville in 1950 when the Army established the Ordnance Missile Laboratories.

Stuhlinger was "in many ways the most important technical figure from the golden age of space," along with von Braun and Russia's Sergei Korolev, who developed the first artificial satellite, Sputnik, Petroff said.

He was arguably Huntsville's most influential resident and deserves a public tribute from the city, Petroff said.

"If von Braun was the Columbus of the 20th century, Ernst Stuhlinger was his navigator and confidante."

Stuhlinger is survived by his wife Irmgard, two sons, a daughter, two grandsons and a sister.