A journalist of Russia's central state-run TV channel was found dead in his apartment in Moscow early Friday. An investigation has been filed into his murder. 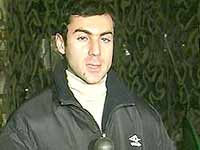 A correspondent of Channel One, Ilyas Shurpayev, was found dead in his rented studio apartment with stab wounds and a belt around his neck, Channel One spokeswoman Larisa Krymova said. She said a fire was apparently set in the apartment after the attack.

The Investigative Committee, a branch of the prosecutor's office that announced the murder investigation, said nothing about a possible motive, and Krymova declined to comment on that aspect of the case.

Most likely, Shurpayev let his killers in himself. A concierge in Shurpayev's building said that he had called down from his apartment early Friday to ask her to let two young men in.

Shurpayev, 32, was a native of the mostly Muslim Dagestan province and had worked in Russia's violence-ridden North Caucasus, which includes Dagestan and war-scarred Chechnya. Dagestan is plagued by tension among rival groups and political factions.

Hours before his death, Shurpayev wrote in his blog that the owners of a newspaper in Dagestan banned a column he wrote from appearing in the paper and instructed its staffers not to mention his name in publications.

"Now I am a dissident!" was the title of the last entry in the Web journal under his name.

It was not immediately clear whether there was a connection to his death.

"I hope the murderers of such a great person and talented journalist will be punished," Dagestan's Information Minister Eduard Urazayev said.

Channel One led its noon newscast with a report on Shurpayev's death. It said he had moved to Moscow several months ago from Dagestan, where his wife and their 5-year-old daughter remained.

More than a dozen journalists have been slain in contract-style killings in Russia since 2000. Many journalists appear to have been targeted for beatings and killings because of their attempts to dig into allegations of corruption.

Hate attacks on members of ethnic minorities from the Caucasus and former Soviet Central Asia are also common in Moscow.