No longer will Paris boast of its iconic smoky cafes. 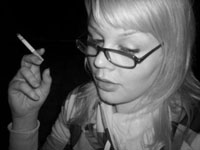 France is extending its smoking ban to bars, restaurants, discotheques, hotels and safes on Jan.1. No longer will image of thinkers and romantics sitting at cafes with the cigarette in their hands be associated with the country, the AP reports.

That is a real disaster for smokers. Workplaces, schools, airports, hospitals and other "closed and covered" public places like train stations were the first in the smoking ban list.

But non-smoking bartenders and restaurant staffers want to breath fresh are and their closes and hair not to be smoky.

Other countries found that smoking ban led to good results.

In the first 18 months after the town of Pueblo , Colorado enacted a smoking ban in 2003, hospital admissions for heart attacks dropped 27%. Admissions in neighboring towns without smoking bans showed no change. The American Heart Association said, "The decline in the number of heart attack hospitalizations within the first year and a half after the non-smoking ban that was observed in this study is most likely due to a decrease in the effect of second hand smoke as a triggering factor for heart attacks."

Similar findings are beginning to emerge from other areas which have enacted bans. Researchers at the University of Dundee found significant improvements in the health of bar staff in the two months following the ban. They tested bar workers' lung function and inflammatory markers a month before the ban came in, and again two months after it had been introduced. The number showing symptoms related to passive smoking fell from more than 80% to less than half, with reduced levels of nicotine in the blood and improvements in lung function of as much as 10%.

A 2007 study of the effect of the ban in Scotland showed that there was 17% year-on-year drop in heart attack admissions since the ban was introduced in March 2006.  However, another source suggests heart attack admissions declined by 14% in the three months prior to the Scottish smoking ban. Furthermore, the study has not yet been published, nor has the data on which it was based. An analysis of the saliva of 39 non-smoking workers before and after the Scottish smoking ban came into force found a 75% fall in cotinine, which is a by-product of nicotine. The level of cotinine is a good indicator of how much cigarette smoke has entered the body.