Sex ed to make pupils put off having sexual intercourse

Sex education in school may encourage teenagers to put off having sexual intercourse, the results of a U.S. government study suggests. 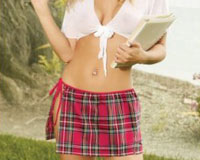 Sex ed to make pupils put off having sexual intercourse

The study was published Wednesday in the Journal of Adolescent Health.

The findings suggest that having some form of sex education helps delay teen sex, according to the researchers, from the Centers for Disease Control and Prevention (CDC) in Atlanta.

Almost all U.S. students receive some form of sex education at least once between grades 7 and 12; many schools begin addressing some topics as early as grades 5 or 6. However, what students learn varies widely, because curriculum decisions are so decentralized. Many states have laws governing what is taught in sex education classes or allowing parents to opt out. Some state laws leave curriculum decisions to individual school districts.

For example, a 1999 study by the Guttmacher Institute found that most U.S. sex education courses in grades 7 through 12 cover puberty, HIV, STIs, abstinence, implications of teenage pregnancy, and how to resist peer pressure. Other studied topics, such as methods of birth control and infection prevention, sexual orientation, sexual abuse, and factual and ethical information about abortion, varied more widely.

Pravda.Ru has earlier published an article about sex education in Russia.

A Moscow school teacher once heard her pupils talking during a bus ride. Horror was in her eyes as she related the story to her colleagues. “Just imagine those young bastards discussing in detail sexual relations with their classmates!” said she and gasped in indignation.

A parents' meeting convened shortly after the bus ride story. Many a father and mother were shocked to know the news about their sons and daughters. The parents apparently had no idea that their boys and girls, those sweet angels looking very domestic and innocent, were no strangers to sex.

A study by the Center of Sociology under the Russian Academy of Education is based on the opinion polls involving 3,000 pupils of seventh, ninths, and eleventh grades. The study sheds light on many problems faced by teenagers including sexual behavior.