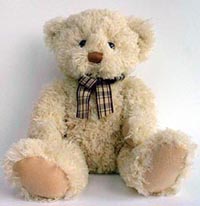 Thousands of Sudanese, armed with curbs and knives, demanded execution of the English teacher who, they say, insulted Islam by allowing students to name a teddy bear Muhammad.

The protesters streamed out of mosques after Friday sermons, as pick-up trucks with loudspeakers blared messages against Gillian Gibbons, the teacher who was sentenced Thursday to 15 days in prison and deportation.

They massed in central Martyrs Square, outside the palace, where hundreds of riot police were deployed, though they did not attempt to disrupt the rally. "Shame, shame on the U.K.," protesters chanted, and they called for Gibbons' execution, saying, "No tolerance: Execution," and "Kill her, kill her by firing squad."

The women's prison where Gibbons is being held is far from the site. Unity High School, which is closer by in central Khartoum, is under heavy security protection.

The protest arose despite vows by Sudanese security officials the day before, during Gibbons' trial, that threatened demonstrations after Friday prayers would not take place. Some of the protesters carried green banners with the name of the Society for Support of the Prophet Muhammad, a previously unknown group.

Some of the protesters, who an Associated Press reporter at the scene said numbered as many as 10,000, carried clubs, knives and axes - but not automatic weapons, which some have carried at past government-condoned demonstrations, suggesting Friday's rally was not organized by the government.

During Friday sermons, the Muslim cleric at Khartoum's main Martyrs Mosque denounced Gibbons, saying she intentionally insulted Islam but he did not call for protests.

"Imprisoning this lady does not satisfy the thirst of Muslims in Sudan. But we welcome imprisonment and expulsion," the cleric, Abdul-Jalil Nazeer al-Karouri, a well-known hard-liner, told worshippers.

"This an arrogant woman who came to our country, cashing her salary in dollars, teaching our children hatred of our Prophet Muhammad," he said.