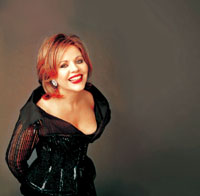 Renee Fleming will not perform Bellini’s opera "Norma" because this role "just didn't fit," according to her publicist.

The 48-year-old star soprano had planned to sing the title role for the first time next summer at the Tanglewood Music Center with the Boston Symphony Orchestra and conductor James Levine. It was supposed to be a warmup for performances in Zurich, Switzerland, and a new Robert Wilson production at the Metropolitan Opera in the 2011-12 season.

But the opera wasn't included in the Tanglewood schedule being released Friday. Instead, Fleming was listed for the Aug. 2 concert performance of Tchaikovsky's "Eugene Onegin."

"The part just didn't fit as she had hoped it would after living with it," Fleming publicist Mary Lou Falcone said Thursday. "Sometimes you can sing it through, sing it through perfectly, it's not a problem. But I think that she lived with it and realized that when you infuse it with the drama and everything else that goes with it, it just wasn't the best choice for her."