A young boy from Arkansas is possibly the latest child to fall ill after ingesting a popular, Chinese-made toy containing a chemical that turns into a powerful "date rape" drug when eaten. 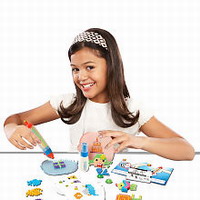 Shelby Esses said Thursday that her 20-month-old son Jacob fell and went limp after getting into his older sister's Aqua Dots set, which was recalled Wednesday by the Consumer Product Safety Commission. It was the latest Chinese-made toy pulled from shelves in North America.

"That's when we knew what he had eaten and that things were pretty bad," she told ABC's "Good Morning America" television news and talk program

Aqua Dots, a highly popular holiday toy sold by Australia-based Moose Enterprises, are beads that can be arranged into designs and fused when sprayed with water. The toy was pulled from shelves in North American and Australia after scientists found they contain a chemical that converts into the so-called date rape drug when eaten. Two children in the U.S. and three in Australia were hospitalized after swallowing the beads.

Scientists say a chemical coating on the beads can metabolize into the drug gamma hydroxy butyrate. When eaten, the compound - made from common and easily available ingredients - can induce unconsciousness, seizures, drowsiness, coma and death.

Dr. Matt Jaeger, of Arkansas Children's Hospital, treated Jacob and said he was very worried when he saw him.

"It was pretty dramatic," he told ABC. "He was unconscious in this coma for about six hours. And then over the course of just a few minutes, went from being completely asleep to wide awake and playing like nothing ever happened."

Meanwhile, toy sets seized in Hong Kong were being tested Thursday, a customs official said, speaking on condition of anonymity because of policy. If the tests come back positive for the chemical, suppliers in Hong Kong could face a year in jail and fines of $12,877 (8,746.77 EUR), she said.

A spokeswoman for the CPSC said Thursday that parents should keep the toy out of children's' hands.

"If a child ingests them the glue turns into a toxic substance and it's very serious," Julie Vallese, a spokeswoman for the CPSC, said on CBS' television's "Early Show." "We want parents very much to heed this warning."

Vallese said two U.S. children had fallen into "comatose" conditions from the Aqua Dots. The children have since recovered, she said.

In Australia, the toys were ordered off store shelves Tuesday when officials learned that a 2-year-old boy and a 10-year-oldgirl were hospitalized after swallowing the beads. A 19-month-old toddler also was being treated.

China's toy industry came under closer scrutiny earlier this year when Mattel Inc. recalled more than 21 million Chinese-made toys worldwide. Products including Barbie doll accessories and toy cars were pulled off shelves because of concerns about lead paint or tiny detachable magnets that could be swallowed.

Aqua Dots, which are called Bindeez in Australia, were named toy of the year at an industry function in that country.

Retailer Toys "R" Us Inc. said it issued a "stop sale" on the entire Spin Master Aqua Dots product line Tuesday in its North American stores and on its Web site. "We understand that Spin Master and U.S. regulatory authorities are investigating this product and we have asked Spin Master to fully explain what it believes happened," it said.

Toys "R" Us also pulled the toys in Hong Kong, Singapore and Malaysia after officials in Australia ordered them off shelves.

A company spokeswoman for Moose Enterprises' Hong Kong office said the production of the toy was outsourced to a mainland Chinese factory. She refused to elaborate and referred all further requests for comment to the company's head office in Australia.

"Our Hong Kong office is only responsible for operations such as logistics and shipping arrangements, we don't have any firsthand information," the employee, who would only give her surname, Lo, told The Associated Press.

Moose Enterprises said Bindeez and Aqua Dots are made at the same factory, which is in Shenzhen in southern Guangdong province. Last week, the government announced an export ban on more than 700 toy factories in the region because of shoddy products.

The company said the product is distributed in 40 countries.

The toys were supposed to use 1,5-pentanediol, a nontoxic compound found in glue, but instead contained the harmful 1,4-butanediol, which is widely used in cleaners and plastics.

The Food and Drug Administration in 1999 declared the chemical a Class I Health Hazard, meaning it can cause life-threatening harm.

Both chemicals are manufactured in China and elsewhere, including by major multinational companies, and are also marketed over the Internet.

It's not clear why 1,4-butanediol was substituted. However, there is a significant difference in price between the two chemicals. The Chinese online trading platform ChemNet China lists the price of 1,4 butanediol at between about $1, 350-$2,800 per metric ton, while the price for 1,5-pentanediol is about $9,700 per metric ton.