Chimpanzee, believed to be the first animals to learn human language, dies

Washoe, a female chimpanzee believed to be the first non-human to acquire human language, has died of natural causes at the Washington state research institute where she was kept. 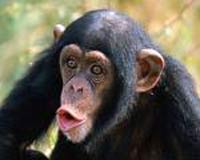 Chimpanzee, believed to be the first animals to learn human language, dies

Washoe, who first learned a bit of American Sign Language in a research project in Nevada, had been living on Central Washington University's Ellensburg campus since 1980. She had a vocabulary of about 250 words, although critics questioned whether she was actually using language.

She died Tuesday night, according to Roger and Deborah Fouts, co-founders of The Chimpanzee and Human Communications Institute on the campus. She was born in Africa about 1965.

She was taken to the veterinary hospital at Washington State University in eastern Washington on Wednesday for a necropsy. Her memorial will be Nov. 12.

"Washoe was an emissary, bringing us a message of respect for nature," Dr. Mary Lee Jensvold, assistant director of the nonprofit institute, said Wednesday.

Washoe was the only chimpanzee at the institute born in Africa and was the matriarch of the chimpanzee family. She was named for Washoe County, Nevada, where she lived with Drs. Allen and Beatrix Gardner of the University of Nevada, Reno, from 1966 to 1970.

Primate researcher Jane Goodall, in Roger Fouts' book "Next of Kin," noted the importance of the work with Washoe.

"Roger, through his ongoing conversations with Washoe and her extended family, has opened a window into the cognitive workings of a chimpanzee's mind that adds new dimension to our understanding," Goodall was quoted as saying.

In 1967, the Gardners established Project Washoe to teach the chimp ASL. Previous attempts to teach chimpanzees to imitate vocal languages had failed. Roger Fouts was a graduate student of the Gardners.

But claims about Washoe's language skills were disputed by scientists who believed that language is unique to humans. Among those who doubted that chimps could use language were linguist Noam Chomsky and Harvard scientist Steven Pinker.

Chomsky contended that the neural requirements for language developed in humans after the evolutionary split between humans and other primates. Pinker contended that primates simply learn to perform certain acts in order to receive rewards, and do not acquire true language.

The Gardners said they tried to make Washoe's environment as similar as possible to what a human infant with deaf parents would experience. Researchers communicated with Washoe by sign language, minimizing the use of spoken words.

The Gardners said that, for example, when Washoe entered their bathroom, she made the sign for "toothbrush," when she saw one.

Washoe also used the sign for "more" in many different situations. At one point, she used the sign for "flower" to express the idea of "smell." After additional training, Washoe was eventually able to differentiate between "smell" and "flower," her supporters said.