Brazil Thursday successfully launched a rocket on a 20-minute flight aimed at studying the effect of microgravity on human enzymes and DNA. 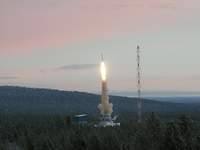 The 12.6-meter-long (41.3-foot-long) VSB-30 rocket, was launched from the seaside Alcantara launch site in northeastern Brazil, the Brazilian Space Agency said in a statement posted on its Web site.

Thursday's launch was the second from Alcantara since Aug. 2003, when 21 space agency workers were killed as a satellite-launching rocket exploded while being prepared for launch.

Investigators determined that an electrical flaw triggered one of the rocket's four solid-fuel boosters during final preparations at the launch pad. Fourteen months later the space agency launched a sounding rocket.

The Alcantara base in the state of Maranhaois considered an excellent launch site because it is located just 2.3 degrees south of the equator, the line at which the Earth moves the fastest, helping propel rockets into space and using less fuel.