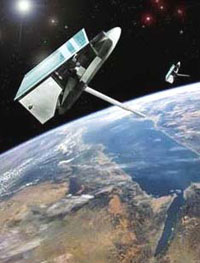 A total of five satellites will ultimately comprise the SAR-Lupe system, which will be Germany's first satellite-based reconnaissance system, allowing high-resolution radar images night and day, according to German officials.

Last week, a Russian military satellite and a private U.S.-built spacecraft were successfully sent into orbit aboard Russian rockets.

In addition to launch facilities in Plesetsk and Baikonur, Kazakhstan, Russia is working with the European Space Agency to expand a launch pad in French Guiana and increase the payloads Russian rockets will be able to carry.