Robot soldiers got a little closer to reality Thursday as a maker of floor-cleaning automatons cooperated with a stun-gun manufacturer to arm robots for the police and the U.S. Department of Defense. 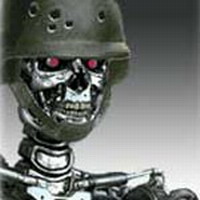 By adding Tasers to robots it already makes for the military, iRobot Corp. says it hopes to give soldiers and law enforcement a defensive, non-lethal tool.

But some observers fear such developments ultimately could lead to robots capable of deciding on their own when to shoot and kill.

"It's one more step in that direction," said John Pike, director of GlobalSecurity.org, a military research organization.

The Taser, used by thousands of law enforcement agencies, is an electric stun gun designed to help officers subdue violent suspects without nightsticks or guns.

"It is not the first step in that direction, but I think at some point toward the end of the next decade, you're going to start seeing RoboCops, or a Terminator," Pike said, referring to a pair of 1980s robot-themed science-fiction films. "We may see autonomous robots capable of inflicting lethal force."

Jim Rymarcsuk, vice president for business development at iRobot, said notions of armed robots acting on their own are far beyond what the company envisions for the partnership announced Thursday with Taser International Inc.

"Right now, we have no plans to take any robot with a lethal-weapon approach to the market," Rymarcsuk said. "For this system, and all systems we have looked at, there is a human in the loop making the decisions. This in no way is giving the robot the capability to use force on its own."

Financial terms of the partnership were not disclosed. The companies said they have developed a model that will be demonstrated at a conference Taser is holding in Chicago on July 9-10. The model pairs iRobot's existing PackBot Explorer with the Taser X26 in what iRobot calls "the first robot of its kind with an on-board, integrated Taser payload."

There is no word when the system will be offered for sale, or for how much.

The system is not entirely unprecedented. Foster-Miller Inc., a rival of iRobot, already offers a version of its track-wheeled Talon robot that can be fitted with a Taser with laser-dot aiming capability.

However, some critics contend the weapon can be deadly, particularly on suspects who use drugs or suffer from heart problems. Taser International and police counter that no weapon is risk-free, and that Tasers actually save lives by helping officers avoid more dangerous weapons.

For iRobot, its Taser-equipped system will be the first robot capable of using force to disable a person, rather than a bomb. The 17-year-old company is best known for its mobile robots for the consumer market, including the disc-shaped, carpet cleaning Roomba.

But home robots account for only 60 percent of the company's revenue. The rest comes from government and industrial customers, including the military and police.

Versions of iRobot's track-wheeled PackBot have disarmed roadside bombs and searched caves and buildings in Iraq and Afghanistan. Some scout dangerous areas before soldiers or emergency responders go in.

With the Taser venture, iRobot "is testing a new market, and they've found a cheap way to do it," said Alex Hamilton, an analyst with The Benchmark Co. "The PackBot works. You'll need software to make it work with the Taser, but my guess is they will be able to achieve it."

Pike said Taser-equipped, remote-controlled robots are still a few steps away from becoming killing machines. If that happens, the development would run counter to a robots-should-not-harm-humans principle that classic science fiction author Isaac Asimov outlined in his 1950 anthology, "I, Robot" - the namesake of iRobot the company.

"For now, as soon as you let go of the joystick, the robot just sits there," Pike said. "So questions of moral agency don't arise _ that is to say, whose finger is on the trigger. But a little further down the road, when these ground vehicles do achieve greater autonomy, there may be no human finger on the trigger."