The American bald eagle marked a four-decade fight for survival no longer requires the protection of the federal Endangered Species Act. 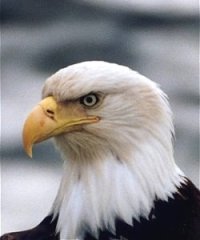 President George W. Bush said the bald eagle's resurgence should be credited to cooperation between private landowners and federal and state governments. "This great conservation achievement means more and more Americans across the nation will enjoy the thrill of seeing bald eagles soar," he said.

Interior Secretary Dirk Kempthorne, making the formal announcement at the Jefferson Memorial, said: "Today I am proud to announce the eagle has returned."

His department made the recovery official by removing the eagle from the list of threatened species under the Endangered Species Act. The bird had been reclassified from endangered to threatened in 1995.

Today there are nearly 10,000 mating pairs of bald eagles in the contiguous 48 states, compared to a documented 417 in 1963 when the bird was on the verge of extinction everywhere except in Alaska and Canada where it has continued to thrive.

"After years of careful study, public comment and planning, the Department of Interior and the U.S. Fish and Wildlife Service are confident in the future security of the American bald eagle," said Kempthorne.

He promised that "from this point forward we will work to ensure that the eagle never again needs the protection of the Endangered Species Act."

The eagle, whose decline came during years in which the bird was often targeted by hunters and later became a victim of the pesticide DDT, will still be protected by state statutes and a federal law passed by Congress in 1940 that makes it illegal to kill a bald eagle.

The U.S. Fish and Wildlife Service is developing guidelines on how that law will be implemented. It also is developing a permitting system to allow landowners to develop their property and still protect the eagle population.