An ice sheet in Antarctica that is the world's largest - with enough water to raise global sea levels by 60 meters (200 feet) - is relatively stable and poses no immediate threat to ocean levels, according to new research. 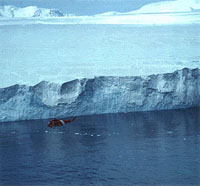 The air over the East Antarctic ice sheet, an ice mass more than 3,000 kilometers (1,875 miles) across and up to four kilometers (2.5 miles) thick centered on the South Pole, will remain cold enough to prevent significant melting in the near future, the New Zealand-led research shows.

But it may eventually become vulnerable to the effects of rising sea levels driven by the melting of other ice sheets, Mackintosh's team found. Their research was published this week in the journal Geology.

"The East Antarctic ice sheet is the largest and the coldest and is going to be the last to respond in any great way" to global warming, he said.

"Our research suggests changes in sea levels due to global warming will not be caused by changes in the East Antarctic ice sheet yet," Mackintosh said.

Rising sea levels in the short term will instead be mostly caused by the melting of valley glaciers, thermal expansion of the oceans, and from the retreat of the Greenland and West Antarctic ice sheets, he said.

Rising waters during that period would have lifted the buoyant ice sheet's edges off its rocky base, causing pieces to detach or "calve" and melt.

If the sheet experienced such calving again, even small changes could have a significant impact, the researchers said.

The study - conducted with Australia's Macquarie University and the Australian Nuclear Science & Technology Organization - did not predict how much sea levels would have to rise before the sheet's edges started to break away.

Glaciologist Wendy Lawson, head of geography at Canterbury University who took no part in the study, said the new research supported previous modeling indicating the sheet was stable.

"There is no short-term risk as far as the overall magnitude of the East Antarctic ice sheet goes," she said.

"My take on the East Antarctic ice sheet is that it is likely to grow in the next 100 years" as the climate warms and air moisture rises, enabling more snow, Lawson said.