Space station computers to get final test on their status

A revived set of crucial computers aboard the international space station still need to undergo one more test on Monday before they are given a clean bill of health. 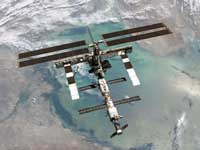 Space station computers to get final test on their status

That test will determine if the two computers are ready to handle controlling the station's orientation. The results will help determine if space shuttle Atlantis, which has been at the space station since June 10, needs to spend another day at the outpost.

During the computer meltdown, Atlantis' thrusters were used to help the station maintain its position. The space station's thrusters haven't been used since last week.

Atlantis is currently set to undock on Tuesday and land Thursday in Cape Canaveral, Florida.

"We will have sort of an extra double-check if you will to make sure everything is running well," flight director Kelly Beck said of Monday's test.

The Russian computers, which also control oxygen production, crashed last week. All six of the computers' processors were brought back online by Saturday. The two processors that took longer to revive are now on standby mode and can be used if needed.

Except for an oxygen generator, all the space station systems that were powered down when the computers failed are now running.

Also Monday, Atlantis' crew was to finish packing the shuttle for its return trip to Earth. The shuttle and space station crews were set to say their goodbyes before hatches between Atlantis and the outpost are closed in preparation for Tuesday's undocking.

On Sunday, shuttle astronauts completed the fourth and final spacewalk of their mission to continue the construction of the space station.

During a nearly 6 1/2-hour spacewalk, astronauts Patrick Forrester and Steven Swanson activated a rotating joint - their top priority - on the outpost's newest segment so a new pair of solar wings can track the sun and provide power to the station. The solar arrays were delivered to the space station by Atlantis.

The astronauts also set up a new camera stanchion outside the station's newest segment and a computer network cable between the U.S. and Russian sides of the outpost. They were not able to bolt down a problematic debris shield and instead secured it in place with tethers.

Overnight Monday, flight controllers on the ground planned to give the rotating joint a small test by moving it 5 degrees. A more thorough test to see whether the solar arrays track the sun was in store for later in the day Monday.