A South African vet will perform what is being described as the world's first cataract surgery on an orangutan in Malaysia, an official said Tuesday. 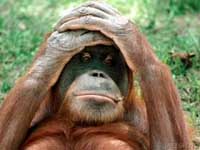 Venter flew to Malaysia in March to examine the 19-year-old orangutan, named Aman, who was suffering from severe cataract in both eyes, said the official.

The New Strait Times daily quoted Venter as saying in a report to the wildlife center that he would make a small incision in Aman's eye to remove the cloudy contents.

"It will be the world's first cataract surgery on an orangutan and it is going to be performed on home territory. It will be a big achievement," the Times quoted Amilan as saying.

The vets could not be reached for comment. The Matang wildlife official confirmed it was the first ever such surgery performed on an orangutan.

The newspaper said Aman, who was rescued from a market in Sarawak, had suffered two permanent injuries - his tongue was removed after he bit an electric cable and his left index finger was bitten off by another orangutan, the report said.

Aman has two female offspring, both now living with him at the center, officials said.

Orangutans are species of great apes with long arms and reddish, sometimes brown, hair native to Malaysia and Indonesia. They have a life span of up to 30 years. Orangutan is derived from the Malay word "orang hutan," which means the "man of the forest."