A two-nosed calf born in the USA

Mark Krombholz had to look twice at his new calf, Lucy one time for each nose. 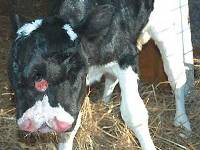 A two-nosed calf born in the USA

"I didn't notice anything too different about her until I got her in the barn," Krombholz said, "and all of a sudden I went to feed her a bottle of milk, and I thought maybe she'd been kicked in the nose and there were two noses there."

The second, smaller nose sits on top of the first.

"It's a functioning nose because the middle of her second nose, the flap would go in and out when she drank out of the bottle like that," Krombholz said. "It was kind of funny."

"It looked like she was comfortable laying there in her bedding and breathing and spunky just like you want to see," Grund said. "It's just that she's got two noses."

That kind of rare deformity is usually not the result of genetics, he said. But breeders do track such mutations.

"We'll fill out a form, send that on to the company in Shawano and they will keep record of it," Grund said. "If by chance this would occur more than a few times, they would start looking at maybe the sire that we're using."

Krombholz said Lucy, who was born May 4, will be a pet and bred if she is able.