A new study is raising questions about the effectiveness of small, metal crates for pregnant pigs that animal welfare groups say are cruel and inhumane. 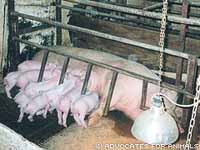 Researchers from Iowa State University found that allowing pregnant pigs to move freely in group housing structures called hoop barns could be less costly and just as productive as the narrow, individual crates.

"What we found was that there appears to be no real difference in pig performance between the two," said Peter Lammers, an ISU graduate research assistant who conducted data analysis for the 2Ѕ-year study.

There has been a backlash against placing pregnant sows in the gestation crates. Some food processors and fast food chains have pledged not to purchase meat from producers who use them, and some chefs said they would only use crate-free pork. The European Union has decided to phase out the crates by 2013, while voters in Florida and Arizona have approved ballot initiatives to ban them over the next few years.

"Highly intelligent animals, curious animals are crammed in a 2-foot-by-7-foot (24-centimeter by 84-centimeter) cage that doesn't even allow them to turn around," said Wayne Pacelle, CEO of the Humane Society of the United States.

He said the sows remain in the cages for most of their four-month pregnancies, amounting to about three years of their lives by the time they're eventually slaughtered.

The pork industry has defended the use of the gestation crates, which allow producers to house as many pigs as possible in one building. Industry representatives argue that pregnant sows can be aggressive toward one another in groups, and that the stalls allow for equal feeding and care of each sow. Individual management of the animals has been thought to aid their productivity.

Dave Warner, a spokesman for the Washington, D.C.-based National Pork Producers Council, which lobbies for the nation's 67,000 pork producers, said the majority of the group's members use gestation stalls, though he noted that both the crates and group housing have their advantages and disadvantages.

The ISU study was conducted at a research farm in southwest Iowa. It compared sows housed in stalls in mechanically ventilated confinement buildings with those in naturally ventilated hoop barns with straw bedding.

Researchers who tracked 957 litters from 353 sows found that sows in the hoop barns gave birth to more live pigs per litter than those confined in gestation stalls.

They also found that group housing may produce pigs at a lower cost - as much as 11 percent less per weaned pig - than the gestation stalls, Lammers said.

He said sows in the hoop barns may have done better because of the bedding and ability to huddle, which allows them more control over their temperature. Individual feeding stalls in the hoop barns continued to allow for feed management.

Even though soiled straw must be removed, the researchers said group housing may not require more labor per animal than gestation stalls.

"In the United States, using a bedded system for gestating sows in hoop barns is relatively unfamiliar," Mark Honeyman, animal science professor and coordinator of ISU's Research Farms, said in a statement. "With increased experience, management will evolve and production may be enhanced."

A related study, based on a survey of general contractors and equipment and materials suppliers, said the estimated construction cost per gestating sow in hoop barns was US$552 (EURO 408), compared with US$815 (EURO 602) for the crates.