Some Florida high school athletes who play three sports would be subject to random testing for anabolic steroids under a one-year pilot program. 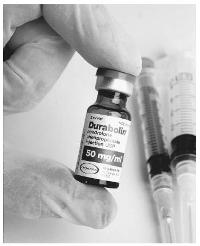 One percent of students who compete in American football, baseball and weightlifting during the 2007-08 school year would be tested under the legislation passed Friday, which would become effective on July 1 if Gov. Charlie Crist signs it.

The Florida High School Athletics Association would oversee the tests of all of its 426 public and 224 private member schools. The bill includes $100,000 to pay for the testing.

Any athlete who refuses to provide a urine sample would be ineligible to remain on the team. Those who test positive would be suspended from the team, but could be reinstated if they pass a follow-up test later.

Republican state Rep. Marcelo Llorente, a former university athlete, has pushed for the legislation in Florida for several sessions.

"It's been a four-year endeavor, but I'm elated that both chambers passed the bill unanimously," Llorente said. "I'm optimistic the governor will sign it."