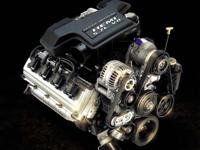 Chrysler Group announced Monday that it will offer a hybrid Hemi in its Dodge Durango and Chrysler Aspen sport utility vehicles that will improve their fuel economy by nearly 40 percent in the city and about 25 percent on the highway.

Analysts have said the "two-mode" hybrid system, developed jointly with General Motors Corp. and BMW AG, could vault SUVs and trucks into the same fuel efficiency range of some larger sedans.

Current Aspens and Durangos get 13 miles per gallon (18 liters per 100 kilometers) in the city and 18 (13 liters) on the highway, but the hybrid versions should get an estimated 18.2 mpg (12.9 liters per 100 kilometers) in city driving and about 22.5 (10.4 liters) on freeways. Chrysler would give only the percentage increases and not actual numbers, saying that mileage testing had not yet been completed.

The computer can judge speed, towing load, terrain, temperature, humidity, wetness of the pavement and other factors to decide the most fuel-efficient combination of technologies.

Truckenbrodt said the hybrid system will allow people to tow large loads and carry a lot of people or gear, yet still give them good fuel economy.

"We just know that this 5.7-liter Hemi is really a natural fit for this multi-displacement system," he said.

DaimlerChrysler plans to use it in Mercedes and more Chrysler vehicles, although Truckenbrodt would not say which ones.

GM plans to sell the hybrid system in its Chevrolet Tahoe and GMC Yukon SUVs in the fourth quarter of this year, and the system will go into the Cadillac Escalade SUV and Chevrolet Silverado and GMC Sierra crew cab pickups sometime next year.

Chrysler would not say the price of the hybrid models, nor would it state the towing capacity other than to say it knows people want something comparable to the current 8,950 pounds (4,059 kilograms).

Most associate the 335-horsepower Hemi engine with muscle and the new hybrid system may change that image but Chrysler will have a lot of marketing work to do, said Rebecca Lindland, an auto analyst at Global Insight, an economic research and consulting company.

"The death of the Hemi is greatly exaggerated," she said. "Consumers really need to continue to explore their options when it comes to powertrains and not just necessarily say 'that thing has a V-8 engine and I can't get good mileage out of it."'

Her company's research, though, shows that SUVs are politically incorrect and conflict with the desire of most hybrid buyers to make an environmentally friendly statement.

"What Dodge needs to do is very clearly mark this vehicle as a hybrid version. They want everybody to know how much they're saving the environment," she said.

The hybrid system is a key for the companies that developed it because Americans still aren't ready to give up larger vehicles for compact cars, she said.