More than 600 years after the city's most famous monument was built, construction starts in June of a modern glass and steel building that will simulate a tilt with a trick of lighting. But the project has stirred controversy. 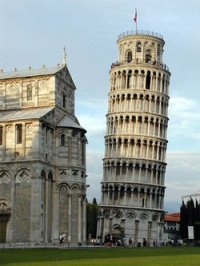 The building, designed by architect Dante Oscar Benini, will house apartments and offices about 5 kilometers (3 miles) southeast of the real Leaning Tower. The new construction will be exactly the same height as the original monument 57.6 meters (189 feet) tall.

"I do not dare to go 1 centimeter higher than the original tower, but I simply offer a different visual angle onto the square," Benini said in a recent telephone interview from his Milan office. The architect's works include a science center in Hong Kong and another complex in Istanbul, Turkey.

"There is a sort of glass cover wrapping around the building which, ... together with natural and artificial light, makes the tower appear to be leaning," he said.

The 19-story tower, built on the outskirts of the city, will be covered on the Western and Southern sides by the curved glass sheet starting from the third floor.

The undulating sheet will give visitors the impression that the building is leaning in different directions depending on where they are standing. But its main purpose is to create an insulating cushion of air that reduces the need for heating and air conditioning.

"In the winter it's a greenhouse and in the summer it's a ventilator," Benini said.

The tower will also be equipped with elevators to bring visitors to a panoramic terrace, from which they can see the Leaning Tower, he said.

But some academics and local officials object to the idea.

"There are things that are so unique they can't be replicated," such as the Colosseum in Rome or the Rialto Bridge in Venice  symbols of Italy, said Gioacchino Chiarini, the head of the literature department at the University of Siena.

Architect Bonanno Pisano began construction of the original tower in 1173 to celebrate the glory of Pisa, in those years a wealthy maritime republic. The soil beneath its foundations began sinking before workers completed the third level, starting the centuries-long tilt that prompted Mark Twain to call the monument "the strangest structure the world has any knowledge of."

The builders forged ahead, completing the tower in 1360, and by 1990, the tilt had worsened to such a degree that the tower was closed for years and an ambitious project was undertaken to correct some of the lean.

Over the course of the renovation, engineers reduced the lean by 44 centimeters (17 inches) and guided the monument back to where it was in 1838. The difference is not visible to the naked eye.