Scientists have found clusters of new gene variants that raise the risk of Type 2 diabetes - and how the researchers did it is as important as what they found. 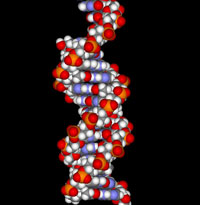 In one of the largest studies yet of human genetic variability, the scientists tested the DNA of more than 32,000 people in five countries to pin down spots that harbor genetic risk factors for this complicated killer.

This type of research - called a "genome-wide association" study - promises to usher in a new era of genetics. Most breakthroughs so far have come from finding a mutation in a single gene that causes illness. But some of the world's most common killers, such as heart disease and diabetes, are caused by complex interactions among numerous genes and modern lifestyles - and teasing out the genetic culprits until now has been almost impossible.

"We have been for all of the last decade or more looking under the lamppost to try to find those genes ... and lots of times the lamplight was not actually where we wanted it," said Dr. Francis Collins, genetics chief at the National Institutes of Health, a co-author of the research unveiled Thursday.

This new approach "allows us to light up the whole street, and look what we find."

What? Four previously unknown gene variants that can increase people's risk of Type 2 diabetes, and confirmation that six other genes play a role, too.

The work, by three international research teams that shared their findings, was published online Thursday by the journal Science.

Also Thursday in the journal Nature Genetics, another team led by Iceland researchers reported separately finding one of those same new genes - and that, interestingly, it seems to increase the diabetes risk most in people who aren't obese.

Next, the researchers will have to figure out just what those genes do, in hopes they'll point toward new ways to treat or prevent a disease that affects more than 170 million people worldwide, and rising.

With Type 2 diabetes, the body gradually loses its ability to use insulin, a hormone key for turning blood sugar into insulin. It is a major cause of heart disease, as high blood sugar damages blood vessels, and leads to kidney failure, blindness and amputations.

Obesity and lack of exercise are chief risk factors. But heredity is involved, too: People with an affected parent or sibling are at 3.5 times greater risk of developing diabetes than people from diabetes-free families.

The new work scanned DNA to find patterns of small gene variations known as SNPs (pronounced "snips") more common in diabetics. SNPs can serve as signposts for tracing disease-promoting genes. To be certain the implicated SNPs were involved, the researchers then checked for them in still more volunteers, ultimately testing DNA from 32,500 people in Britain, Finland, Poland, Sweden and the U.S.

The highest-risk variants can increase by 20 percent someone's odds of developing Type 2 diabetes, the teams reported.

Among the genes implicated:

One that helps pump zinc into insulin-producing pancreatic cells, raising questions about the metal's role in insulin secretion.

A pair previously linked only to certain cancers, another brand new area for diabetes researchers to probe.

A region of chromosome 11 where genes of any sort had never been described.