Chinese meteorologists plan to force rain ahead of 2008 Beijing Olympics

Chinese meteorologists said Wednesday they are drawing up plans to force rain ahead of the 2008 Beijing Olympics so that showers could not mar the Games. 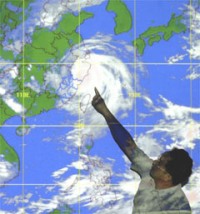 Chinese meteorologists plan to force rain ahead of 2008 Beijing Olympics

Wang Yubin, an engineer with the Beijing Meteorological Bureau, told a press conference that historical data from the past 30 years indicate there is a 50 percent chance of rain for the opening ceremony on August 8, 2008 and the closing ceremony a little more than two weeks later.

"We are now drafting the implementation plan for the artificial rain mitigation for the opening and closing ceremonies," said Wang Yubin, an engineer with the Beijing Meteorological Bureau. "We will take necessary measures for the possible rain mitigation."

"When conditions permit, we will artificially increase rainfall," she said. "Rainfall is a way to naturally clean the air."

Beijing's air pollution is among Asia's worst. Officials have shuttered several chemical and steel plants on the city's edge, and many polluters will shut down or cut back during the Games. But the city also has 2.9 million registered vehicles, and the number is expected to reach 3.3 million by the Olympics, a 13 percent increase.

Though unusual in many parts of the world, China has been tinkering with artificial rainmaking for decades, using it frequently in the drought-plagued north.

Last year, Beijing boasted having generated rainfall to clear the air and streets following the worst dust storm in a decade.

Technicians with the Beijing Weather Modification Office said last May they had fired seven rocket shells containing 163 cigarette-size sticks of silver iodide over the city's skies, which they claimed forced four-tenths of an inch (one centimeter) of rain.

Whether cloud-seeding actually works has been the subject of debate in the scientific community. In 2003, the U.S. National Academy of Sciences questioned the science behind it as "too weak."