A California woman has given birth to the first baby conceived in the U.S. by means of frozen sperm and a frozen egg, according to the fertility firm that sponsored the study in which she took part. 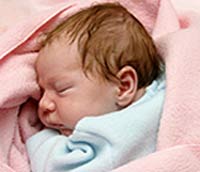 Adrienne Domasin, 36, decided to participate in the study by Extend Fertility after being told two years ago her fallopian tubes were blocked. She gave birth to a boy on Wednesday.

Domasin, who is single, was unable to afford in vitro fertilization but was determined to have a baby.

"When they told me my tubes were blocked, I was naturally devastated," she said. "Here I was, ready to finally have the baby of my dreams and I couldn't."

Egg freezing traditionally has been reserved for women who suffered from illnesses that might leave them infertile and has a low success rate. But there has been recent demand for the procedure by women in their 30s who want to have children in the future but are afraid they will be too old to conceive the traditional way, said Dr. Jane Frederick, who oversaw Domasin's fertility treatment.

The low viability of frozen eggs is due, in part, to ice crystals that can damage the egg's structure, though freezing sperm has been done for decades, said Richard Paulson, a professor of reproductive medicine at the University of Southern California.

There have been about 200 documented births from frozen eggs worldwide, Paulson said. But he had not heard of other cases of frozen egg/frozen sperm conceptions. The Journal of Assisted Reproduction and Genetics reported one case last year in Australia.

During the study, Domasin received shots and pills to stimulate egg production. Fertility personnel harvested the eggs, froze them, and after four months, injected them with thawed donor sperm. A fertilized egg was then placed insider her.

"I kept waking up in the middle of the night and I would glance over at him," Domasin said. "I just kept saying to myself 'he's my son."'