NASA will try to launch Atlantis on the first space shuttle mission of the year in early June, almost three months later than originally planned, so that technicians can finish repairing its hail-damaged fuel tank, officials said. 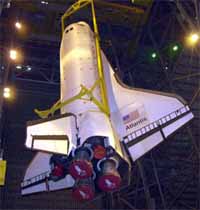 The new launch date now was set for no earlier than June 8.

NASA managers had been studying for weeks whether to finish repairing the tank and use it for Atlantis' mission or swap it out with another tank.

But NASA managers said Tuesday they were pleased with the progress of repairs that already have been made.

"We don't see any showstoppers in front of us ... but there is still a lot of work to be done," said Bill Gerstenmaier, NASA's associate administrator for space operations.

Golfball-sized hail left thousands of dings on the foam insulation on Atlantis' fuel tank as it sat on the launch pad in February. The space shuttle was rolled off the launch pad and sent back for repairs to the Vehicle Assembly Building, forcing NASA to miss the original March 15 launch date.

The foam is used to prevent dangerous ice from building up on the tank during fueling on the launch pad.

The insulating foam is of special concern to NASA since a chunk of it flew off during space shuttle Columbia's launch in 2003 and struck the orbiter. The damage allowed fiery gases to penetrate Columbia during re-entry, breaking up the craft and killing its seven astronauts.

A June launch of Atlantis pushes back the flights of the three other shuttle missions that NASA still hopes to launch this year.

It also delays by more than a month the return of U.S. astronaut Sunita "Suni" Williams, who is living at the international space station 220 miles (354 kilometers) above Earth. She is to return on Endeavour, the second shuttle mission of the year, whose launch was pushed back from the end of June to early August.

Williams, who has been living at the space station since December, is expected to break the U.S. record for continuous time in space. Her current crew mate, Michael Lopez-Alegria, will set that record when he returns to Earth next week in a Russian Soyuz vehicle with 214 days in space. The longest stay in space was 437 days by Russian Valeri Polyakov.

"It doesn't really matter. I have lots to do up here," Williams told reporters Tuesday via satellite before NASA announced its launch decision. "For me, it won't really change the way I operate here."

Gerstenmaier said Williams could return on Atlantis if it looks like the launch of Endeavour is going to be delayed past August.

With the extra time, NASA engineers also decided last week to inspect Atlantis' propulsion lines to make sure a silicon rubber mold material was not left behind in them. A small amount of the material which is used to check for cracks in the lines was found in one of the engines used during Discovery's mission last December and another engine that flew on Discovery last July.

Atlantis' three engines were to be removed so technicians can get to the propulsion lines, but the inspection was not expected to affect the launch schedule, said NASA spokeswoman Tracy Young.

During their 11-day mission, Atlantis' crew will deliver a new pair of solar arrays to the space station and fold up an old pair of solar panels. Atlantis' six astronauts were in "good spirits," Hale said.

"They're happy to spend a little more time in training but they're anxious to fly," he said.