Engineers mounted a Russian-made Soyuz rocket on a launch pad in the middle of barren Kazakh steppes Thursday as part of final preparations for two Russian cosmonauts and a U.S. "space tourist" to soar into space in two days. 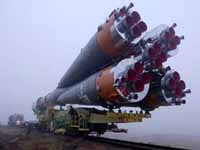 Simonyi's space journey will take roughly 13 days, including 11 days on the orbiting station and travel time to and from it.

Simonyi, 58, who is paying about US$25 million (EUR19 million) for the ride, returns to Earth on April 20 with the current occupants of the orbiting outpost, Russian cosmonaut Mikhail Tyurin and U.S. astronaut Miguel Lopez-Alegria.

The third member of the current crew, U.S. astronaut Sunita Williams, remains on the station until June, when she will be replaced by Clayton Anderson. Yurchikhin and Kotov will stay in orbit for six months.

A locomotive slowly rolled the 40-meter (130-foot) gray, white and orange Soyuz booster out of a massive hangar and carefully towed it on a train car toward a launch pad at the Baikonur Cosmodrome, Russia's facility for manned space missions that it leases from Kazakhstan.

Dozens of police with bomb-sniffing dogs patrolled the tracks, as the rocket was moved through bleak, dusty fields, covered with rusty pieces of scrap metal and dotted with shabby hangars, underlying the funding shortages the Russian space program has experienced since the Soviet collapse.

"Basically the system is trying to make ends meet, and to make sure they meet we are forced to resort to non-budget methods of financing, such as tourism," Krikalev told reporters as the rocket was being erected at the launch pad.

Simonyi, a former Microsoft executive who was born in Communist Hungary and moved to the United States in 1968, has been undergoing rigorous training before the flight. Even though Simonyi has appeared calm and confident and space officials have said he was fully prepared for the trip, Krikalev acknowledged the would-be space tourist was feeling a bit nervous.

"He is prepared, but it is understandable that he is getting more nervous before the launch, it is quite natural," Krikalev said.