A new US study suggests that eating low fat dairy food every day can reduce a woman's fertility by affecting ovulation. 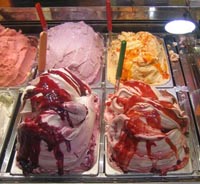 The study is published in the journal Human Reproduction. The study showed that women who ate more than two portions a day of low fat dairy foods were 85 per cent more likely to be infertile due to ovulatory disorders than those who only ate it less than once a week.

Previous studies have suggested that dairy foods can interfere with ovulation, but few of them have been on humans and they are inconsistent. The researchers in this study wanted to assess to what extent the fat content of dairy foods in a woman's diet might be linked to infertility due to ovulation problems.

The study also found that the more ice cream the women ate, the lower their risk, so that a woman eating ice cream two or more times a week had a 38% lower risk compared with a woman who ate ice cream less often than once a week.

Intakes of lactose, calcium, phosphorus, and vitamin D were unrelated to anovulatory infertility, the researchers reported. It had been thought that dairy fat and lactose might impair fertility by affecting ovulatory function, they said. However, few studies have been conducted in humans, and the results are inconsistent.

In the current study, there was neither a positive nor a negative association for lactose and fertility within the usual range of intake levels in humans, they said.

In discussing the association between the low-fat diet and infertility, the researchers discussed the possibility that women with or with suspected polycystic ovary syndrome who changed their diet to include more low-fat foods would be likely to have anovulatory infertility. This was not the case in these data, the researchers said.