A diet rich in black soya beans could help control weight, lower fat and cholesterol levels, and aid in the prevention of diabetes, reports Lisa Richards in Chemistry & Industry, the magazine of the SCI. 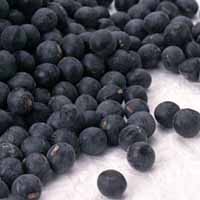 This press release issued by Eurekalert says that yellow soya has already been hailed for its cholesterol lowering capabilities; this is one of the reasons why frozen food manufacturer Birds Eye has added the beans to its range. However, a team of Korean researchers has shown that black soya may be even more potent in rats, and also prevents weight gain, reports Hindu.

After two weeks, those getting 10 per cent of their energy from black soya had gained half as much weight as those in the control group.

Experts believe that the soya protein could slow down the metabolism of the liver - reducing the production of fatty acids and cholesterol.

Reducing the amount of fat in the body would then protect against diabetes.