Chinese scientists have succeeded in implanting electrodes in the brain of a pigeon to remotely control the bird's flight, state media said. 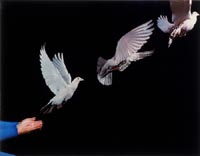 Xinhua News Agency said the scientists at the Robot Engineering Technology Research Center at Shandong University of Science and Technology in eastern China used the micro electrodes to command the bird to fly right or left, and up or down, the AP reports.

The implants stimulated different areas of the pigeon's brain according to electronic signals sent by the scientists via computer, mirroring natural signals generated by the brain, Xinhua quoted chief scientist Su Xuecheng as saying.