Pregnant polar bears in Alaska, which spend most of their lives on sea ice, are increasingly giving birth on land, according to researchers who say global warming is probably to blame. 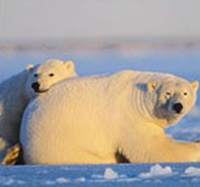 The study by three scientists for the U.S. Geological Survey suggests the state's bear population could be harmed if the climate continues to grow warmer. Though bears are powerful swimmers, at some point they might have to cross vast stretches of open water to reach habitat on shore suitable for building dens in which to give birth.

Researchers "hypothesized that the sea ice changes may have reduced the availability or degraded the quality of offshore denning habits," said wildlife biologist Anthony Fischbach, lead author of the study. In recent years, Arctic pack ice has formed progressively later and melted earlier each season, he said.

The study is under review by the Geological Survey. Fischbach spoke about the findings Monday at the Alaska Marine Science Symposium, reports AP.

Scientists estimate the Beaufort Sea polar bear population at 1,526. In the study, researchers used satellite technology to track 89 bears in northern Alaska that led them to 124 dens between 1985 and 2004.