What does it take to bring a dinosaur to life or at least a life-sized recreation? 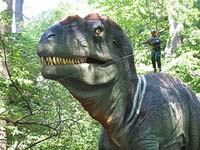 Start with 296 meters (323 yards) of fabric stretched over 132 meters (144 yards) of foam. Stuff the contraption with a kilometer (half a mile) of cabling, six hydraulic motors and a dozen truck batteries. Program 24 computers to control the reptile's every move and cover with 200 liters (56 gallons) of paint.

Finished product: A 2-ton Torosaurus that stomps, snorts and roars on remote-controlled demand.

The horned herbivore is one of 15 animatronic dinosaurs making their world debut on Wednesday in Sydney in a stage production of the popular British Broadcasting Corp. documentary, "Walking with Dinosaurs."

"Walking with Dinosaurs, the Live Experience" is "the closest you'll ever get to experiencing what it was like when dinosaurs walked the earth," the promotional flyer promises.

Judging from the size of the beasts, you wouldn't want to get much closer.

A team of 60 costume designers and engineers have been working since last year to recreate the ancient creatures, which came in two sizes big and bigger.

Weighing more than a family car, the Torosaurus is among the smallest dinosaurs in the show.

The largest, a long-necked Brachiosaurus, measures the length of two city buses and stands more than 11 meters (36-feet) tall. And no dinosaur show would be complete without the king of predators the terrifying Tyrannosaurus Rex.

The animatronic dinosaurs bat their reptilian eyelids and gnash their teeth with a startling ferocity.

But they can be tender too. During a recent demonstration in Sydney, a group of schoolchildren cooed and giggled as a playful Ankylosaurus wagged its club-like tail when they patted its heavily armored head.

Behind the scenes, it takes three people to operate each reptile.

A driver in a motorized sled between the dinosaurs' legs maneuvers each beast around the stadium floor. Meanwhile, a puppeteer hidden in the stands controls each dinosaur's arms, head and tail with a so-called "voodoo rig," a miniature, flexible version of each beast. When the puppeteer flicks the miniature tail, the life-sized dinosaur responds by remote control.

A third puppeteer manipulates the eyelids and jaw with a joystick, and controls its sounds.

"I certainly was a dinosaur nerd, and this is a great combination of technology and performance and creativity," said Tilders, who also designed the creatures in "Star Wars Episode III, Revenge of the Sith" and the "The Chronicles of Narnia: The Lion the Witch and the Wardrobe."

"That's really what animatronics is, a combination of those renaissance skills the aesthetics and the science. That's why I love it," he said.

The 12 million Australian dollar (US$9.3 million; Ђ7.14 million) production will tour Australia before opening in the United States in July. Promoters hope to take the show to Europe and Asia later this year.