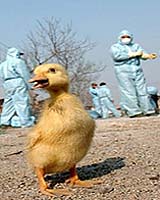 The findings, released this week in the Proceedings of the National Academy of Sciences, said the new strain called H5N1 Fujian-like was found in almost all poultry outbreaks and some human cases in southern China and was now becoming prevalent in Hong Kong, Laos, Malaysia, and Thailand.

"China has taken note of the study about the variation of the bird flu virus in southern China published by an academic journal abroad," the ministry said in a statement read aloud to reporters at a Foreign Ministry briefing. "The comments they made do not conform with facts."

The Agriculture Ministry said H5N1 had been monitored in southern China since 2004 and that there had not been any significant mutations to the virus.

"The biological characteristics of the virus do not show apparent changes," said the statement.

The retort follows renewed criticism by the World Health Organization that the ministry has not shared bird flu samples with the international health body since 2004. Sharing is key in helping health experts track the diseases and ultimately develop vaccines.

The Agriculture Ministry defended its actions. "We have shared all the information related to bird flu virus and diseases to international organizations in a timely manner," the statement said.

The H5N1 flu has devastated poultry in China and several other southeast Asian countries and has claimed more than 150 human lives. Public health authorities fear that the virus will mutate into a form that can spread easily among people, raising the potential for a worldwide pandemic that could kill millions.

The study released in the journal Tuesday by Chinese and American scientists charted the spread of the new strain by testing geese and ducks found in live markets in six southern Chinese beginning in June 2005, reports AP.

Over the course of the year, the new strain became more pervasive, the study said. Among the 108 samples taken from poultry in April and June 2006, 103 or 95 percent were infected with the Fujian-like strain, the study said.