The Hubble Space Telescope, which opened Earth's eyes to an awe-inspiring universe of star births and colliding galaxies, got a reprieve from the junk pile. 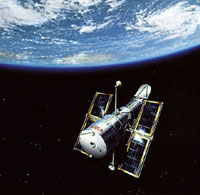 NASA Administrator Michael Griffin on Tuesday announced a daring space shuttle flight to repair and upgrade the 16-year-old telescope in the spring of 2008 a reversal of the previous NASA chief, who chose to let the orbiting telescope die because of safety concerns for astronauts after the shuttle Columbia disaster.

The $900-million (Ђ700-million) rehab mission, carried out in five astronaut spacewalks from the shuttle Discovery, should permit the telescope to keep taking pictures until 2013, allowing scientists to gaze even deeper into the beginnings of the cosmos.

Without this repair mission, Hubble's batteries and stabilizing machines could die near the end of the decade, making useless what has been called "the people's telescope."

"This is probably one of the most important decisions for astronomy," said Mario Livio, a senior astrophysicist at the Space Telescope Science Institute in Baltimore, which operates the school bus-sized instrument.

Hubble's iconic pictures, such as the towering Eagle Nebula, have touched the public in ways that science normally cannot do. That is partly because Hubble went from being a failure just after launch to a roaring success, said Syracuse University science and technology professor Henry Lambright.

"The results of Hubble, the beautiful pictures that we see Hubble produce, the images of the cosmos are gripping to everyone who looks at them," Lambright said. "They transmit the magic of space in a way that words cannot."

In 2004, NASA head Sean O'Keefe canceled the fourth Hubble servicing mission because if the shuttle's critical heat shield were harmed during launch, there would be no place for the crew to await rescue. It was such damage to the Columbia that led to the deaths of seven astronauts in 2003 as their flight returned to Earth, reports AP.

NASA now has astronauts inspect their spacecraft while it is in orbit, and they are able to hole up in the international space station the destination for the other 14 remaining flights in the shuttle program.